If you’re up-to-date on the latest livestock and pig production news, it’s likely you’ve heard about the tragic impact of African Swine Fever (ASF) in Asia. ASF is so severe the National Pork Producers Council (NPPC) canceled the 2019 World Pork Expo, held annual in Des Moines, Iowa, for the first time since 2001. The decision to cancel World Pork Expo, the world’s largest swine-specific tradeshow, demonstrated the NPPC’s commitment to minimize the chances of transmitting the disease into currently ASF-free countries. 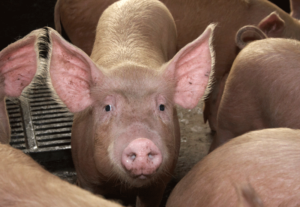 Throughout the years, ASF outbreaks have been reported most commonly in Africa and in parts of South America and Europe. In August 2018, the first cases of the disease were reported in China’s swine herd, the world’s largest. Since then, extensive efforts have been made to prevent the spread of the disease as much as possible.

Ultimately, the best way to protect pigs from ASF is prevention, so it’s especially important to educate yourself about this disease, its impact, and its symptoms. These are the vital facts you need to know…

What is African Swine Fever?

African Swine Fever (ASF), caused by the Asfarviridae family of viruses, is a pig-based disease that is very similar to classical swine fever (CSF), also referred to as hog cholera. There are 22 types of ASF currently known to epidemiologists.

The virus affects virtually all members of the pig family, including domestic pigs, wild boars, feral swine, warthogs, bush pigs, and giant forest hogs, and contamination can occur through a variety of methods, including:

Because ASF and CSF are so similar, it requires a vet to distinguish which strain of the virus is occurring with lab testing. This careful testing helps to ensure appropriate action and quarantine of the herd is taken.

Staying educated about the symptoms of ASF is really the only way to help keep pigs safe from the disease, as there is no vaccination to prevent or cure the infection. Keep a close eye on your pigs to ensure they are not suffering from any of the following symptoms:

For pigs infected with ASF, death typically occurs within a few days after expressing symptoms, so it’s crucial to act fast if you notice any signs that your pigs may be suffering from ASF.

How Does ASF Impact Pork Production?

While ASF is not a risk to human health, the deadly and significant impact it has on livestock producers is unarguable. Having a swine disease prevention strategy should be a common practice for all pig farmers in order to run a successful farm, especially with a disease as contagious and deadly as ASF.

Unbelievably, pork products from animals diagnosed with ASF are actually safe to eat, but because of export regulations, the global pork industry is going to be severely affected from the outbreak. The country that will be affected most negatively is undoubtedly China. As the world’s largest pig producing country, it’s been estimated that nearly 200 million pigs could eventually be affected, with more than 50% of the countries’ sows culled. Since August 2018, nearly 1.16 million pigs have been culled because of the ASF outbreak in Asia. 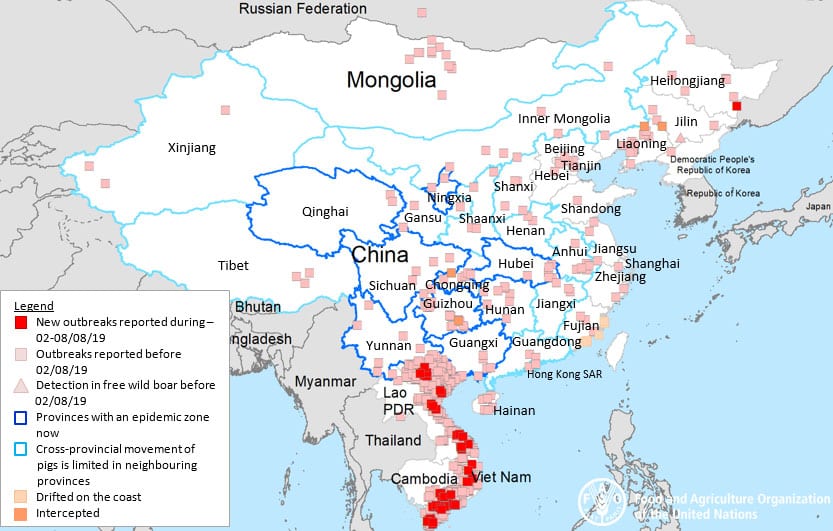 With the epidemiology of this disease being extremely complex, there are numerous factors that need to be taken into consideration. The USDA has been continuously working with agencies at both the federal and state levels within the swine industry to help protect pigs within the U.S.

How to Prevent African Swine Fever

There is, unfortunately, no vaccination or treatment for pigs that have been diagnosed with ASF, so prevention is the only way to fight against this disease and protect livestock from exposure. There are several ways to work to prevent this, including:

Do not feed domestic pigs food waste. Although “garbage feeding” is actually permitted in some U.S. states, pigs should not be fed with food waste. The practice is actually illegal in the UK and many other countries.

Sanitize equipment and hands properly. Providing the means for all farm staff to sanitize themselves before entering and exiting the farm will help keep the herd free from disease.

Stay up-to-date on infected regions. Importing goods from infected countries could lead to contamination, so make sure you double-check on anything coming into your property from countries that have experienced outbreaks of ASF.

Educate as much as possible. Making sure people are advised on the risks of infected regions and the impact ASF could have is the first step in prevention.

For nearly 50 years, Osborne has been an industry leader in the development, design, and manufacture of livestock and hog production equipment. Just like you, we stay updated on disease outbreaks or animal health concerns in order to facilitate informed safety decisions and protect the well-being of production animals. Contact us to learn more today!