In hog farming, gestation crates are utilized as an individual pen in which sows and gilts are confined during the period of pregnancy. Also known as sow stalls, the enclosures are generally made of metal and come in various sizes. They were introduced in the 1960s to increase production on farms, to meet a pig’s nutritional needs during pregnancy, and to provide a means of safety for animals. When sows were placed in group pens during pregnancy, it was noted that some ate more than they should and others had less feed than they needed. Also noted was the animal’s aggressive behavior while pregnant.

Gestation crates or individual stalls are used as a way to nurture the animals and protect them first during pregnancy. Because the animals are vulnerable during this time, with some sows more aggressive than others, the practice of separating the animals in crates keeps them from fighting and injuring each other. In addition, the case has also been made that crates make it easier for hog farmers to monitor individual sow health and administer vaccines as needed.

Using heat mats also keeps piglets safe from their large-bodied mothers by providing a gently warm resting area to lie on when not nursing.

With states and several large pork-producing countries restricting and banning the use of gestation crates for the duration of a sow’s pregnancy, another method to ensure a pig’s nutritional and safety requirements are met was needed. At the core of the gestation crate issue was the requirement that sows have free movement and mobility during pregnancy, with consumers and activists demanding a more animal-friendly way of managing animals. Even before many states and large-scale pork producers responded by phasing out the use of gestation crates after breeding, Osborne had already developed an open-pen animal management system known as electronic sow feeding (ESF). 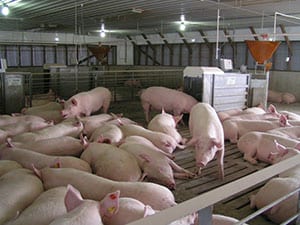 With safety and nutrition at the forefront, Osborne introduced the TEAM® (Total Electronic Animal Management) System. As a complete management system for gilts and gestating sows in large pen gestation, TEAM was developed after Osborne’s extensive research of animal behavior in group-housed settings with many European companies and early adopters of ESF in the U.S. Since its inception in the 1980s, the TEAM System has become one of the most reliable and proven electronic sow feeding systems in the world. By utilizing RFID technology, ESF aids in the complete reproductive management of the large sow herds, but also allows for managing individual sows without their individual confinement.

Benefits of ESF with the Osborne TEAM® System

ESF assists in the total reproductive management of gestating, farrowing, and unbred sows and gilts. When properly managed, research indicates that Key Performance Indicators (KPIs) are equal if not better with ESF than with traditional gestation crates. Animals have freedom of movement, yet exact nutritional requirements can be matched on an individual animal basis because each animal is fed privately in a feeding station.

TEAM offers an alternative to keeping sows and gilts in gestation crates throughout their entire gestation period. Once the animals have been bred, they can be moved onto the TEAM System. Though crates have some use in breeding and gestation, the TEAM System greatly reduces individual confinement time. Plus, the implementation of the TEAM System and investment in ESF equipment is less expensive than the gestation crate system and requires less space per animal. With the proper system design and management, pen gestation means less stress for your breeding herd.