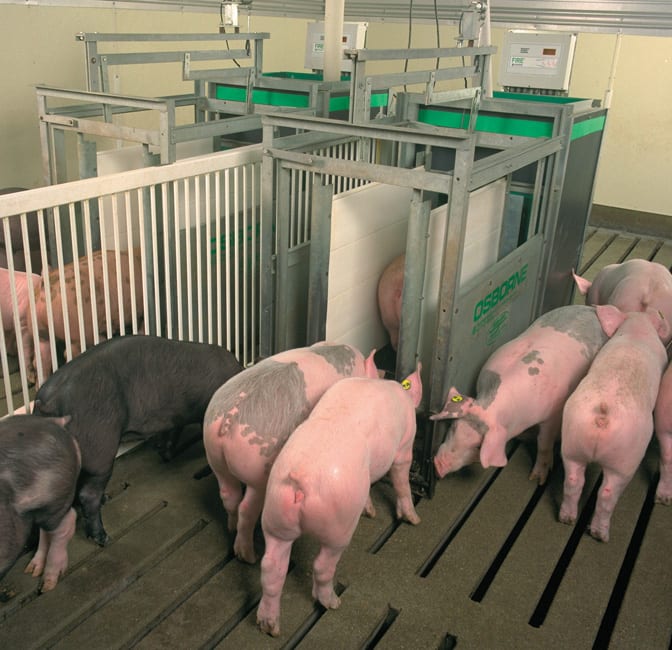 In pig and other livestock breeding, feed conversion is one of the most essential criteria for genetic selection. The more efficiently an animal is able to convert feed into body mass, the faster it can get to market. Identifying superior feed conversion characteristics is important as this trait is passed on from parent to offspring. In the past, identifying animals with exceptional characteristics was difficult owing to manual pig performance testing methods that often included human bias, errors, and were not representative of real-world pig production.

To help automatically identify superior performing animals, Osborne developed an automated feeding solution to collect accurate, real-world results of pig performance. The system is known as the FIRE® (Feed Intake Recording Equipment) Pig Performance Testing system. Over the years, the data that researchers and genetics companies have collected with FIRE has literally changed the genetic makeup of livestock herds all across the world.

The Osborne FIRE® (Feed Intake Recording Equipment) System was originally developed nearly 30 years ago to fill a need in the genetics and pharmaceutical industries. This system automates the measurement of an individual animal’s daily feed intake and growth rate to identify the most efficient animals, ultimately improving the genetic selection of herds.

FIRE is the acknowledged standard for performance testing worldwide, currently being used by more genetics companies than any other system available to accurately test livestock including hogs, goats, and sheep. 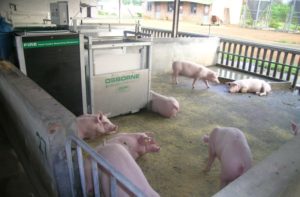 How Does the FIRE® System Work?

Osborne’s FIRE Performance Testing System uses radio frequency identification (RFID) to identify animals housed in realistic size groups, allowing the system to assign measurements to each specific record. A sensitive load cell weighs the feed and trough continually, while the FIRE system records the time and duration of each animal’s visit, in addition to the amount of feed consumed.

This data is transferred directly to your computer system in real-time, making it ideal for generating reports or studying the information in relation to variables such as nutrition, genetics, and environmental factors.

Each FIRE feeder in a pen can accommodate between 12 to 15 animals, each of which is tagged with a unique RFID tag for tracking, which simulates actual commercial production practices. Because of this advanced automation, manual methods of testing animals are completely eliminated, saving time and resources.

Osborne’s FIRE System creates efficiency and clarity in an industry that has historically faced challenges when identifying superior livestock. The data-based system transparently shows how each animal performs to allow for a more accurate analysis of genetics and breeding lines.

Benefits of the FIRE Pig Performance Testing System include:

At Osborne, we look forward to helping you automate your testing protocols for feed intake and animal growth. If you have questions about the standard in pig performance testing technology, FIRE, please contact us today.