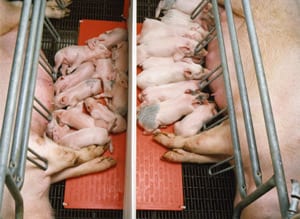 Evidence for the domestication of sus scrofa domesticus – or in common parlance, the “domestic pig” – extends back over 10 thousand years ago, though the first examples of pig farrowing pens only appeared in the early 19th century. Some of the earliest examples come from the United Kingdom, where in 1807 “Mr. Pattinson’s Pig Cases” were promoted to produce healthier piglets.

A sow in the wild seeks an isolated area a day or two before birthing – or farrowing – begins, finding a place well away from the herd. These nesting sites are often outside a sow’s home range and tend to be sloped, offering protection both vertically and horizontally. The sow roots out the nest site, using larger branches to support a makeshift roof of grass, roots, leaves and other organic material over the nest.
Farrowing occurs within a few hours after nest-building ends, with sows tending to keep still.

Generally, the sow sniffs the first few piglets, though does not remove membranes or umbilical cords. The sow remains mostly inactive the first two days, an adaptation perhaps to keep her from accidentally crushing newborn piglets and allowing them to establish teat order. The sow’s maternal behavior during this time focuses on nursing, which is initiated by her lying on her side to display her teats, or else when the piglets squeak or massage the area around her teats.

Farmers generally did not confine their livestock prior to the 20th century, but instead let them graze and scavenge, as labor and supplemental feeding were prohibitively expensive. Before the 1960s, sows housed indoors often used open, rectangular farrowing pens, typically with a straw bed and a heated area in one corner for the litter. In order to reduce piglet mortality, livestock farmers introduced farrowing stalls, which confined sows during farrowing to keep them from accidentally crushing their piglets.

Though this conflicted with a sow’s natural nesting behavior, it did allow her to isolate herself from other sows, which she would naturally do prior to birth. Such confinement reduced fighting among sows and reduced mortality among the litter. Many livestock farmers now move sows to farrowing crates a few days before giving birth. Here she can lie down, with a separate, but attached crate, that allows newly born piglets to nurse while keeping them safe from crushing.

Traditionally, these crates would restrict the movement of lactating sows to protect newborn piglets from crushing. Today, most sows are housed in climate-controlled buildings, which allow farmers to better monitor both the sow and her litter. These stalls typically contain no bedding, instead using just concrete, metal or plastic flooring to allow waste to flow out of the enclosure before being flushed outside into a lagoon.

The most dangerous time for piglets is the first four days after birth, with the majority of crushing incidents happening in their first three days of life. Farrowing crates reduce piglet injury and keep handlers safe from aggressive sows. Future pig farrowing pen and stall systems seek a compromise that will reduce how long sows spend in farrowing crates.

Farrowing pen systems involve removing sows from their stall and putting them in a bigger area where they can move about more freely. These pens often feature slanted flooring and rubber protuberances to encourage piglets to keep away from the sow and encourage her to lie in a specific part of the farrowing pen. Some include nesting areas that encourage natural sow behavior. As farrowing crates restrict the sow, they should provide for her comfort and hygiene while reducing the risk of her crushing the piglets. This also involves heated creep areas that provide optimum temperatures that encourage the growth and comfort of the litter.

Some of the more common pig farrowing pen and crate systems include: Modern pig farrowing pens and crates generally provide the isolation that sows would naturally seek out. A common theme in farrowing pens involves keeping the sows cool – between 60-65° F – and their litters warm – around 95-100° F initially, then ramped down as the litter ages. Typically litters are kept warm by heating pads or lamps, and piglets are monitored closely. If the creep area gets too hot, the piglets will move away, increasing the chance of mortality while causing the sow discomfort.

Two farrowing methods that look at sows’ natural behavior are becoming more prominent in pork production: the free farrowing pen and free-range pig farming. As with other livestock, the idea of allowing pigs more freedom of movement has been becoming a focal point in production, especially with the introduction of legislation like California’s Proposition 12.

New free farrowing pens can provide an environment far closer to nature while keeping the same footprint as standard crates. These pens have sliding bars that protect piglets, along with heat mats and an area for feeding. An open grid allows sows and piglets to see their neighbors while allowing the sow space to turn around. The pig farrowing pens use a slatted floor, often with bedding material.

Another method essentially involves keeping pigs outdoors in a free-range environment, using A-frame shelters for farrowing. While it likely will not replace pig farrowing pens in the near future, as free-range livestock requires so much more space, this niche market will likely increase as more consumers look to buy more naturally raised meat. When it comes to pigs, this essentially looks at allowing sows to return to more natural-like farrowing behaviors, where they can isolate themselves and their piglets while also providing measures to help keep sows from crushing their young.

Osborne is a trusted manufacturer of livestock equipment and a leader in the design of management equipment for several areas of production. Our advanced technology includes automated pig growth management systems, feed intake and performance testing equipment, and large group sow management systems, an alternative system to individually confining sows in crates or stalls during gestation.

To learn more about our products, please contact us today!